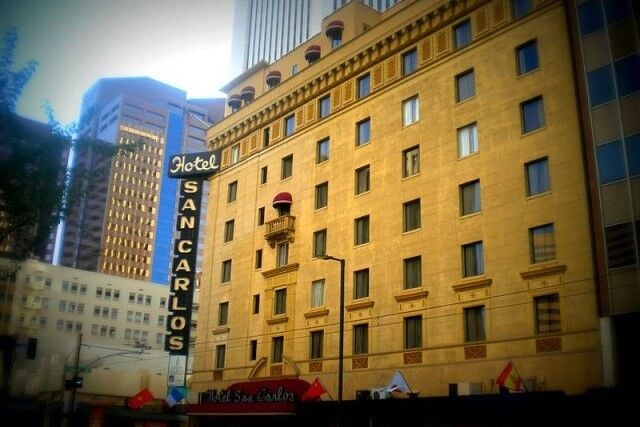 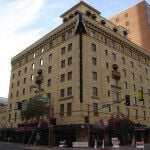 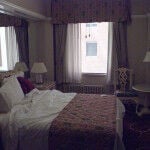 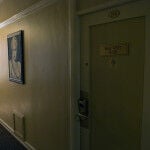 Built in 1928, this historic boutique hotel was, at the height of its popularity, a frequent go-to for members of Hollywood’s Golden Age — Clark Gable, Carole Lombard, Mae West, Gene Autry and Marilyn Monroe, among them. But even with guest lists as celestial as the ones that marked its heyday, Hotel San Carlos is still most often referenced for its hearsay haunted history.

Were it not for the tragedy of a young woman named Leone Jensen, it’s difficult to say where the legend and notoriety of Hotel San Carlos would have begun. Jensen, or what remains of her transcendent existence, is said to be one of several ghosts roaming the rooms and rooftop of the hotel.

It was here on May 27th, 1928 — just weeks after its grand opening — that the 22 year old woman local newspapers described as a “pretty blonde,” jumped from the seven story hotel to her death on the street below.

The stories surrounding what led Jensen to check into room 720 and check out by way of the roof are many and speculative. So too are the hotel stories around the reported ghostly sightings, some of which are thought to be of Jensen. Since her death (popularly believed to be the result of suicide over a breakup with her bellboy boyfriend), a number of witnesses have reported seeing a woman in white standing at the foot of their beds for several seconds before she walks toward the door and vanishes.

The mysterious woman in white neither speaks or appears threatening during her reported visits at the hotel. But, according to other ghost witness accounts, neither is she the lone spirit dweller of Hotel San Carlos. Some have reported seeing the ghost of a little girl sitting and crying in some of the hotel rooms. Still others say they’ve heard the voices of children running through the hallways or laughing in the building’s basement area.

Believers have attempted to link the sightings of the children to the Native American worshipping grounds on which Hotel San Carlos was built and where early Phoenix settlers erected the city’s first school — Little Adobe — in 1874. After a number of incarnations, the school was shuttered in 1916 to accommodate plans for the construction of a luxury hotel.

That hotel — San Carlos — came to fruition after developers Charles Harris and Dwight D. Heard purchased the land from the prominent Phoenix Babbitt family and more than ten years after the schoolhouse had been condemned.

Hotel San Carlos’ luxury-assigned Italian Renaissance style was designed by renowned architect G. Witecross Ritchie. It became known as the most modern hotel in the Southwest United States upon its official grand opening in March 1928. Repurposing the well that was dug for the old schoolhouse it replaced, San Carlos became the first air conditioned, high rise hotel in Phoenix and the first high rise hotel with hand operated elevators in the entire state — all constructed at a cost of about $850,000.

Charles Harris, the hotel’s original owner and General Manager, lived in the penthouse above the seventh floor with his family. Hotel San Carlos’ state-of-the-art facility also routinely attracted Hollywood stars, as well as a who’s who among Phoenix’s political and social elite — even with the legend of its ghostly guests.

In fact, while other establishments tried to hide similar stories of hauntings, Hotel San Carlos openly embraced its ghost stories and continues to welcome curious guests who want to experience its halls and history while waiting for a spirit or two to join the party.

The only operating historic boutique hotel in Phoenix, Hotel San Carlos was recognized as an Arizona State Historic Landmark in 1974 and is a member of the Historic Hotels of America and the National Trust for Historic Preservation. The hotel underwent a multi-million dollar renovation in 2003, updating many of the hotel’s rooms, amenities and architecture, all while preserving its historical foundation.